This, the second interview in The Write Stuff’s series of Readers Favorite award-winning authors focuses on children’s author, Diane Robinson. Diane, I’ve learned, is as fantastic as are her characters. Scouring the web for information about the author produced this: 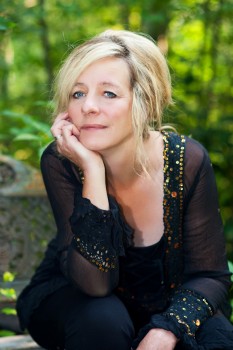 Diane lives in a small hilltop castle nestled amongst a very old and magical forest. In this mystical forest, all the fantasy creatures one can imagine live and audition for parts in the author’s next book.

The author has a journalism diploma from the Schools of Montreal and an advanced diploma from the Institute of Children’s Literature in Connecticut. Diane writes fantasy children chapter books, teaches watercolor and acrylic art to children, and is a writing instructor to adults.

I asked Diane to give us the premise of her latest title, Sir Princess Petra’s Talent – The Pen Pieyu Adventures. This is what she provided:

Sir Princess Petra has already proven she is a kind and noble knight. This, however, does not please the king and queen—they want her to behave like a princess and forget this silly knight nonsense of hers!

But when the king writes a new rule in the royal rule book that requires her to attend Talent School and acquire a princess talent certificate or suffer the spell of the royal magician, Petra, reluctantly, agrees to go. But who could have guessed what Sir Princess Petra’s Talent would be?

How delightful! Will you tell us the story behind your book?

The story behind the book is my rebellious nature, to write the kind of story I want to write, to do something out of the norm, to possibly do what many people say a person can’t do in writing for children. I have studied children’s literature extensively—I don’t agree with all the rules. The main character of this series, Petra, has that same rebellious nature and proves that the unattainable can be accomplished with finesse and pizzazz and through kindness. Maybe I just had to prove, to myself, that a writer doesn’t have to follow the norm to write a fun book for kids.

Working on the 3rd book in my fantasy/adventure children’s chapter book series entitled, Sir Princess Petra’s Mission-The Pen Pieyu Adventures. I’m also working on a grammar book for elementary age children entitled, Grammar for Kids and Dragons—written in a humorous tone with the medieval characters from my series in the grammar examples.

And a worthy task that is. Goodness knows how much dragons need this sort of help.

May I ask why you have chosen your particular genre?

I’ve been fascinated with the medieval era and fantasy books since I was a kid. By the age of nine, I was making up mini plays–with princesses, brave knights, and meddlesome, or fun, dragons–and performing them for the neighborhood kids. The only hard thing about making the plays work was my sister, the brave knight, insisting to wear her cowboy attire at all times and shooting the nasty dragon instead of spearing him. Sheesh! Cowboys!

Sheesh indeed! Will you tell us why your writing is different from other authors in this genre?

I have a bizarre sense of humor (or so I’m told from non-bizarre humor people) and I think some of that humor comes out in the characters quite well. My books have been described as: ridiculously fun; very silly; incredibly witty; charmingly funny; and even, a maverick fantasy with brilliant flashes of humor and originality. Hmmmm.

That said, why should someone buy your book?

Well, if you think you might like to read about Sir Princess Petra, a tom-boy, onion-throwing princess knight who hangs out with a dragon (Snarls, from the Forest of Doom) that is a chef, royal steed, and is her best friend, along with a bog witch who is afraid of frilly dresses and a continuously soggy-smelling midget knight, Prince Nastybun, from the Land of Mesoggie, then you might want to buy the books. Oh, and then there’s Prince Duce Crablips who wears pink armour and likes to crochet, and King Asterman who runs Talent School in the Land of Lost Donkeys.

Hah! Ridiculously funny, indeed. I like it. Tell us a bit about your path to publication.

My road to publication was full of pot holes and ruts and quite a few broken wheels. I wrote the first book as a picture story book, researched publishers, queried them, sent manuscripts, had a couple of bites, and after 9 years and 27 rejections got an actual traditional publishing contract if I could turn the book into a chapter book. I did, publisher and I signed, publisher forfeited contract due to lack of funds (during the 2010 U.S. recession), back to drawing board, several months later found another publisher who wanted my book and does a few traditional contracts a year. Yep signed up, toot sweet. This publisher also accepted book two (since I hadn’t signed a series contract with them), and will publish book 3 also.

Good for you. What is your writing routine?

In the summer, I have no writing routine. Summers in Canada are just too short, and we all flock outside to play ball, ride horses, gardens, cruise on the lakes, drink beer around the fire pit, play ant hockey, stuff like that. By November, when the snow flies, I wake up early on Fridays (day off from day job) and write for several hours in a row. Saturdays, I edit for a few hours, write blog posts, work on marketing, and catch up on social media stuff. 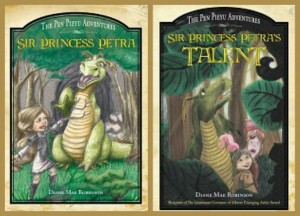 Sir Princess Petra – The Pen Pieyu Adventures (book one) was my first publication, Jan., 2012. Sir Princess Petra’s Talent – The Pen Pieyu Adventures (book two) is the 2nd book published, Sept., 2013. Previous to those publications, I wrote some newspaper articles, and had some poetry published. I have written adult short stories that are not published yet.

Tell us about the awards you have won.

Do you ever experience writers block and, if so, how do you overcome it?

Sometimes I have writer’s block for weeks at a time. I don’t worry about it much and I never force myself to write. I just have to wait until my imaginary friends start talking to me again, and they do, eventually. If my friends have been silent too long (mad at me because of a ridiculous scene I have put them in?), I go for a walk through the forest on my acreage—that usually gets my characters talking real fast (after threats of bringing in new characters).When I’m going through a writing blockage, I usually work on editing and other left-brain thinking stuff.

Some say marketing a book is more difficult than writing it. What is your marketing strategy?

Marketing books is sheer torture chamber stuff. I work on marketing approximately 5 hours per week. I have a marketing manager, a publicist, and an agent. They all give me input and help me with marketing strategies like: news releases, author signings, school visits, book blast promotions, social media, blogging, and author lectures. It’s still a lot of work on my part, but I have seen how the books have become more popular as I keep up a good and steady marketing effort.

Tell us about your writing community.

I live on an acreage, near a small town. This small town has one library and no book stores. There are several self-published writers around the area, and we all know each other, support each other, and keep in touch. Occasionally, we set up multi-author signing together in the small surrounding towns.

What life experiences or careers inspire or enrich your writing?

For several years, I have been an art teacher to children; being around children is rewarding in that I really get to see and hear what children act and think like, which is vital in writing for children.

For the last year, I have been a writing instructor in the course I teach to adults at the Creative Writing Institute–Writing for Children course. Mentoring other writers is a wonderful experience and it makes me into a more prolific writer—well, I have to be or I will get fired. Yikes.

Ever since I read my first book, Black Beauty, at age 7, I have been a fan of the written word. I read all the time, and have rarely watched television, even as a kid. Reading great writers, whether it is children’s literature or adult horror novels always inspires me to be a better writer.

If you ever think to convince a wayward dragon of your opinion, either rub his tummy, or run away (which is very insulting to wayward dragons). But always go with your first instinct.

Before I provide our visitors with the links to your book and way to connect, I’d like to share with them an excerpt from the second chapter of Sir Princess Petra’s Talent – The Pen Pieyu Adventures, the title that earned the Readers Favorite award:

The pink knight spoke with a vibrating voice,

“I am Prince Duce Crablips of the Kingdom of

Crablips. I aim to stop the Princess Knight from

acquiring a talent and gaining her certificate. I

will stop at nothing. We may have to duel if you

do not turn back.”

“What in the entire kingdom are you talking

about?” Petra frowned her eyebrows at him.

“Are you not the Princess Knight?”

“Yes, I am Petra Longstride of the Kingdom

“Oh no, not another do-well?” Snarls

grumbled. “The last time you had a do-well,

you squeezed and squished and twirled

Prince Nastybun in your dance routine for so

long … well, he did finally give up, but honestly,

it was just boring. Don’t you know of any other

“I know all about your little clutch-’em-dance

“I have no intentions of touching you or

dueling with you.” Petra said, feeling quite

sure she was becoming annoyed. “But why in

the kingdom would you care if I received my

Duce Crablips dropped to one knee,

shouldered his spear to point at them, and began

chanting something that sounded in between

humming in Chinese and the rusty wheels of

“Stop that! I can’t understand a word your

saying, and it’s all quite harmful to the ear!” Petra

slid down the smooth scales of her mount.

It landed between Snarl’s toes.

Snarls yanked the spear from the dirt, broke

it in two, then, raised his head and blew out a

fierce stream of something that resembled torn

too many onions in that last omelette ta-da?”

“And as for you, Duce Crablips, just tell me what

your problem is, and you won’t be reported for

interfering with my mission!”

looked like something ready to bake. His eyes, as

wide as royal platters, were wider than his wide

lips. He slowly stood up on shaking legs.

“Is it true they put you in a frilly dress

for interfering with someone’s mission?”

“Worse for messing with a knight!” Petra

scolded. “It’s a strict rule in my kingdom.”

If you, or any younger acquaintances, would like to learn more about Diane or her works, so may do so through the following links.

All About Children’s Books blog: http://www.dianemaerobinson.com