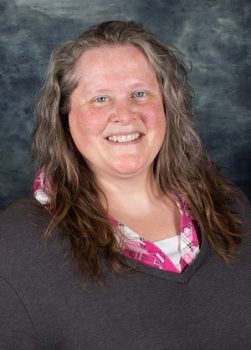 My first guest in 2019 is Bobbi Schemerhorn, one of the group of authors I met after I signed up for Superstars Writing Seminar, conducted annually in Colorado Springs, Colorado. She was born in Nova Scotia, but raised in Alberta. She has lived all across Canada, living in at least five different provinces, thanks to her military husband. Bobbi enjoys watching a variety of TV shows and movies; she is, in her words, “a Sims 2 playing fool, and loves working with her hands making crafts.” Although she has no human children she does have one beautiful kitty who has reached her 18thyear.

Bobbi has self-published eight books, all in the fantasy genre. She has dabbled in Steampunk and Greek Mythology as well as Urban and Epic. Outside of her own writing Bobbi takes pride in helping her fellow authors with their work with her content editing and beta reading. She is known for her tough love both in her professional and personal life.

I asked her to tell me about her urban fantasy Bounty. She describes the book that is also touched by Greek mythology as follows:

On a world called Olympia, a terrible disease plagues the race of gods. As rumors spread about the disappearance of the anomalias, many infected gods flee through portals from Olympia to other worlds, including Earth, hoping to avoid a similar fate.

When the disease infects Rion, a bounty hunter who once helped return anomalias to Olympia, he, too, seeks sanctuary on Earth. But Rion’s partner, Temis, hunts him. Temis still believes the lies told to the bounty hunters about the anomalias. She believes they are violent, paranoid, delusional.

Rion’s only hope is to convince Temis to see the dark truth. But how can he convince her that everything she thought she knew is a lie?

A race against time to discover a chilling truth with powerful consequences.

To be honest I’ve never read any of the other books in this genre. When I started writing Bounty, Greek Mythology was the farthest thing from my mind. But being a pantser, I tend to end up in unexpected places.  My understanding of it now comes from my editor. She had commented that I had taken a new twist to this genre and approached it in a different manner. So you could say that I have broken the mold.

A six book series in a W.O.W/ D&D type setting. The first five books will be written in a standalone fashion, each character getting their own book and story. Then in the last book the five characters will come together.

I’ve written two other separate series. The Guardians Series, which is a trilogy. Legacy, Sacrifice, and Obsession. This series follows a young woman on a journey of unexpected self-discovery. She learns more about her family and herself after she was resurrected from a car accident and thrown into a life of immortality.

The second series is my Mechanical Dragons Series. It’s a four book story line based mostly around a young woman discovering she has magic and the deadly consequences of such knowledge becoming known. She comes to this realization when she unintentionally brings her school project, a mechanical dragon, to life. When the wrong people took notice her world and her families were changed forever.

I just sit down and start writing. I tend to jump all over the place, I don’t write sequentially. So one day I could be writing chapter one but the next day chapter 10. The more scenes and chapters I write the clearer the order of them becomes. When I am over half done I will sit and piece the scenes together. This helps me to discover where there may be some plot issues. I guess you can describe my writing routine as pure chaos.

I don’t create an outline but I usually have a good idea of where I want to start and where the story is going. How I get there and how it all ends is generally a mystery to me.

My greatest challenge is visibility and how to achieve it. Millions of books are published a day, the hardest thing to do is ensure you are one of those million that people see.

If you could do anything differently, what would it be?

I would have chosen to write sooner. I spent nearly ten years thinking about writing and never doing it. If I could talk to my younger self I would tell her to just do it and stop wishing you could.

Forgiving someone isn’t about them, it’s about me. I’ve been wronged by a few people as I’m sure everyone has and for the longest time I would carry around all that anger and hurt because I didn’t or couldn’t forgive them for what they had done. It was exhausting, they lived rent free in my head and I suffered for it. When I finally realized letting all that go helped me in so many ways. I severed ties with some of those people, but I forgave them for what they had done because I needed to let it go. It was then that I also realized their lashing out was their issue. It wasn’t truly about me but rather their own insecurities.

Before I present an excerpt from Bounty, followed by her social and book buy links, I’ll close with my traditional Lightning Round. Bobbi, please answer the following in as few words as possible:

My best friend would tell you I’m: Honest, opinionated, loud, and loyal.

The one thing I cannot do without is:  Chocolate, and my cat, but mostly chocolate.

The one thing I would change about my life:  Stronger knees so I can be more physically active.

My biggest peeve is: People who believe their actions don’t affect anyone else.

Thank you, Bobbi, for taking time out of your writing routine to share with us. Do you have a parting thought you would like to leave us with?

The one piece of advice I can give is to always follow your bliss. It may not put food on the table but it will put joy in your heart. 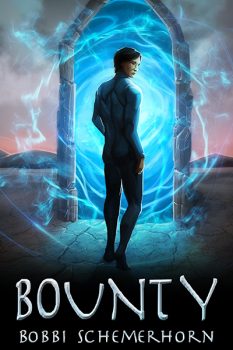 Rion glanced over his shoulder at his home one last time before crossing-over, through the portal and into the Hereafter. The hair on his arms and the back of his neck stood on end from the static caused by the two dimensions merging.

He pushed his way through Olympia’s portal. He could feel the warmth of the solid ground on the other side through the thin soles of his shoes. The Hereafter was a void absent of all life and sound; the space between worlds. He took a ragged breath. The air was so thin there may as well be none.

He spied the glow of Earth’s portal in the distance. He’d never used that particular portal before. Over the centuries Rion had traveled to Earth at least a hundred times, usually chasing the undesirables from his world, but sometimes from other worlds. The criminals would use the Hereafter to cross-over, attempt to escape to other places. It was Rion’s job to bring them home to face justice.

Only this time, Rion was the one on the run.

His circumstance was different. He was no criminal. But his only hope for survival was to seek refuge on another planet. Many of his kind in similar situations fled to Earth, it was the closest thing to a safe haven as they could find.

The Earth portal was approximately twenty minutes away. Rion would need to move quickly to reach it. The Hereafter’s air supply was minimal, and his changing physiology made it difficult to breathe. Gods could survive days in the Hereafter, humans mere minutes. Even though he was more god than human, his survival would still be difficult. He tried to pick up his pace and jog, but the dim light and the uneven surface made it challenging. Rion coughed several times. It felt as if his lungs were collapsing in on themselves from the lack of oxygen. He had to get out, and quickly.

The black surface was like volcanic rock and was cracked as if all water had dried up many millennia ago. But he often wondered if the Hereafter had once been a luscious and beautiful place, full of life. Tiny particles floated in the air around him, only visible if caught at the right angle against the warm glow of the many thousands of portals.

The Hereafter made him uncomfortable. The darkness seemed to enclose on him, and the lack of sound seemed to scream in his ears, like air rushing through a tight tunnel.

As he approached the portal the hair on his arms and the back of his neck again stood on end. The sound of rushing water filled his ears; all of Earth’s portals were submerged. It was going to be a difficult transfer. Kilometers of ocean separated Rion from freedom.

Before crossing-over from the Hereafter to Earth he struggled to take a final breath. His chest tightened and the thin air rattled through his lungs as he heaved in a breath. It had been months of planning, careful meticulous planning. He was directed to take this portal; it was the closest of all Earth’s portals. With his physical changes he would never survive the trek to any of the others.

Rion pushed through the portal. Immediately, the cold of the water began to seep through his bodysuit. It was made of organic material meant specifically for travelling to Earth. They had a series of sensors to help regulate the user’s body temperature in the frigid waters. The organic component also helped to make the suit more buoyant which would help him reach the surface faster. Rion suspected since his physiology is changing the suit wasn’t able to protect him properly.

The water was heavy and dark, he was certain he knew where he needed to go. He struggled, kicking his legs frantically to reach the surface before his lungs finally reached a point where they force him to take a gulp of air. Only it would be a mouth full of Earth’s salty ocean water.

His mind raced and drifted to when he had still been fully a god; when this short distance would have been a mere inconvenience. Now his ability to remain underwater had deteriorated. He knew the changes would only make this journey more treacherous the longer he stayed on Olympia. He feared he waited too long before leaving his world. The illness that plagued him was mutating his genes, changing him into a human.

You can purchase her book here: